Where do you park?

for Recruitment and General Issues

Where do you park?

Seeing this picture got me thinking.....

Where would you usually park if at the motorway services, either as a standby point or to use the facilities? Do any of you actually take up (what looks like) a disabled parking space?
Swatted
Top

Crew above shouldn't be in a disabled space. Too many TOs are lazy and ty to park right outside the doors at MSAs. Most parking spaces are fine, but try to avoid MSAs if possible as too many people asking SFQs.
Top

This photo is not what it seems, it was parked outside the RCC, whilst it was being loaded with heavy boxes destined for one of the outstations. As a rule, I don't use the parking bays at the MSA, if it's a toilet stop, I tend to park round the back out of the way.
http://online-exiles.co.uk
Top

Yep as far away from the entrance as possible

Bob Parr wrote:Yep as far away from the entrance as possible


As far as I can remember, the disabled bay is right outside the main entrance. As a former traffic warden, it is perfectly acceptable for a non disabled person to park in a disabled bay for the purposes of loading/unloading.

In MSA as far back as possible to get maximum ogle potential.

Remember your a womble!
Tidying the network 24/7, of things people leave behind.

slabber wrote:
As a former traffic warden, it is perfectly acceptable for a non disabled person to park in a disabled bay for the purposes of loading/unloading.

Does that include children, big macs etc?
Regards

Meetings didn't make the Roman empire great, they just killed anyone who opposed them!
Top

I'd be ashamed if my oppo tried parking in a disabled/parent & child bay at an MSA/Supermarket etc.

No excuse what so ever.

jezza wrote:I'd be ashamed if my oppo tried parking in a disabled/parent & child bay at an MSA/Supermarket etc.

No excuse what so ever.

We often park close to restricted bays. If I see anyone parking in these spaces that shouldn't I'll have a polite word; have never been told where to get off and they've always moved.....so far anyway.
You tried your best and failed miserably. The lesson is, never try. Homer Simpson
Top

At least one MSa that I know has a bay marked for emergency vehicles - means we can grab lunch on the go.... Would you use it?
Top

cone dropper wrote:In MSA as far back as possible to get maximum ogle potential.

Amen to that my friend

jezza wrote:I'd be ashamed if my oppo tried parking in a disabled/parent & child bay at an MSA/Supermarket etc.

I giv em a swift kick in the nads

If you try and don't succeed, cheat.... Repeat until caught.... Then lie
Top

You need to be reasonably close to the doors, as mentioned above because mistakenly smiling at a lovely thing as she approaches into focus and ages with every step can be a tad embarrasing while your 20/20 crew mate howls his appreciation at your failing long vision.

Peace be with you
actually, I do own the road!
archies snitch
Top

ukmedic1 wrote:At least one MSa that I know has a bay marked for emergency vehicles - means we can grab lunch on the go.... Would you use it?

I know of a couple of MSA's with these bays and yes I have used them a couple of times, especially when you need an emergency comfort break!!! 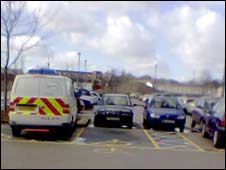 A policeman has been reprimanded for illegally parking a police van in a disabled bay at a supermarket car park.
The officer, who has not been named, has been warned about his "unacceptable behaviour" by bosses at Greater Manchester Police following an inquiry.
The incident came to light when a shopper at the Asda store in Rochdale, Greater Manchester, spotted the van on 30 March and took a photograph.
GMP said they will pay any fine and are "happy to discuss it with the manager".

In February, Asda introduced on-the-spot fines for people caught using disabled spaces without a blue badge at 18 stores in Greater Manchester, including Rochdale.
Money raised by the fines, which started on 25 February, are donated to baby charity Tommy's and Motability, a national disabled charity.
A force spokesman said: "GMP has identified the officer concerned and investigated the circumstances.
"The officer had no justifiable reason for parking in the space and has been warned about his behaviour, which was unacceptable.
"All GMP officers are advised with regard to their responsibilities when parking their vehicle and they should keep this in mind at all times.
"We have told the store that we will pay any fine we owe and are happy to discuss it with the manager."
Owen McGhee, chief executive of the Association of Wheelchair Children, described the officer's actions as "outrageous."

"People who aren't entitled to use disabled bays should not use them as it deprives others who really need them and causes lots and lots of problems," he said.
"It is worse when the police do it as they are supposed to be guarding the interests of others, including disabled people, so to sit in one of these spaces is doubly outrageous."
A spokeswoman for Asda said: "The reason we have decided to have these rules regarding special car park bays is to ensure that people who need them the most, such as people with disabilities and children, get them.
"Everyone should respect these spaces and if they don't, they run the risk of getting a £60 fine.
"There is nothing stopping GMP from making a donation to Motabilty or Tommy's, or if they want to make a donation to the Asda Foundation that would be a nice gesture and appreciated."

So, in a nutshell, there's no excuse even if you have blue lights on your car

It's only me
Registered Member

There's always some ba***rd waiting to to stab us or the emergency services in the back but when the call to say their house has been screwed they want someone there yesterday! Glad I'm out of that game now into a much less stressful occupation.